An all-discreet, all-step symmetric non-feedback phono amplifier that draws out the music’s reality and the artist’s passion.

PRODUCT OUTLINE AND CONCEPT
With the mindset that analog playback still has room for improvement, Phasemation has expanded the numerous product line-ups and phono amplifiers due to non-feedback circuits for lovers of analog records.
Phasemation is pleased to announce the release of the EA-320, a middle-class semiconductor phono amplifier that incorporates the essence of their advanced models, with refined circuitry to further refine the sound quality and functionality.

I. A 10MM THICK ALUMINUM MATERIAL IS USED ON THE FRONT PANEL AND THE CHASSIS IS ELEGANT AND STRONG AND IT IS STRUCTURED FOLLOWING THE DESIGNS OF EA550 AND EA350.
Phasemation have adopted a strong housing structure that is composed with a 10mm thick slant aluminum panel for the front, a 1.2mm thick steel plate chassis base, and a 1.2mm thick steel plate cover and this preserves the rigidity.
A heavy weight metal insulator that blocks external vibrations is used for the feet.

Ⅱ. V-I / I-V CONVERSION TYPE FULL-STAGE SYMMETRICAL NON-FEEDBACK AMPLIFIER CIRCUIT DUE TO ALL DISCREET PARTS
Both the semiconductor amplifier and the vacuum tube amplifier are negative feedback amplifiers which are the mainstream of modern amplifiers and they constantly compare the input and output signals and this difference can be amplified with high precision at low cost because it is amplified as an input signal. However, there is a time delay between the input and output signals which cannot be solved theoretically and this generates a TIM distortion and the like and this is a big reason why sound satisfaction cannot be attained from negative feedback amplifiers.
At Phasemation, amplifiers of semiconductors and vacuum tubes are all composed of non-feedback amplifiers.

Ⅲ. MAIN FEATURES
2 input terminals are equipped and each input is MM/MC switchable.

A non-feedback type low cut filter of CR2 step is included.
Plays warped phonograph records without any music deterioration and prevents the speakers (woofers) from shaking.

A “degaussed” circuit is loaded.
By choosing “degauss” with the input and playing the record for about 30 seconds, the MC cartridge with a metal core that was magnetised is degaussed and the sound quality becomes clear.

Ⅴ. ADOPTION OF PARTS HAVING HIGH SOUND QUALITY
1. ON THE SIGNALS
A) A 1% grade metal film resistance with marginal rated capacity and reputed high sound quality parts such as Micar capacitors using silvered Micar plates for dielectrics are used on the RIAA elements which have a high influence on the phono amp’s sound quality (for only selecting STEREO on playback curve)

B) On the signals, ELNA’s SILMIC electrolytic capacitors for sound quality and metal film resistance of a 1% grade are used.

2. ON THE POWER CIRCUITS
A) The switching noises are few and adopts Rohm’s SiC diodes which have a reputation for high sound quality.

B) We adopted a large-room electrolytic capacitor that is of the highest rank in audio grades of metal-plated terminals which uses Nichicon’s low-resistance electrode foil on the commutating capacitor.
In addition, the decoupling capacitor adopts ELNA’s SILMIC II.

C) Low-noise Zener diodes are used combined with the adoption of shunt regulators that exclude the feedback circuit and this structures a fast and extremely low noise power circuit. 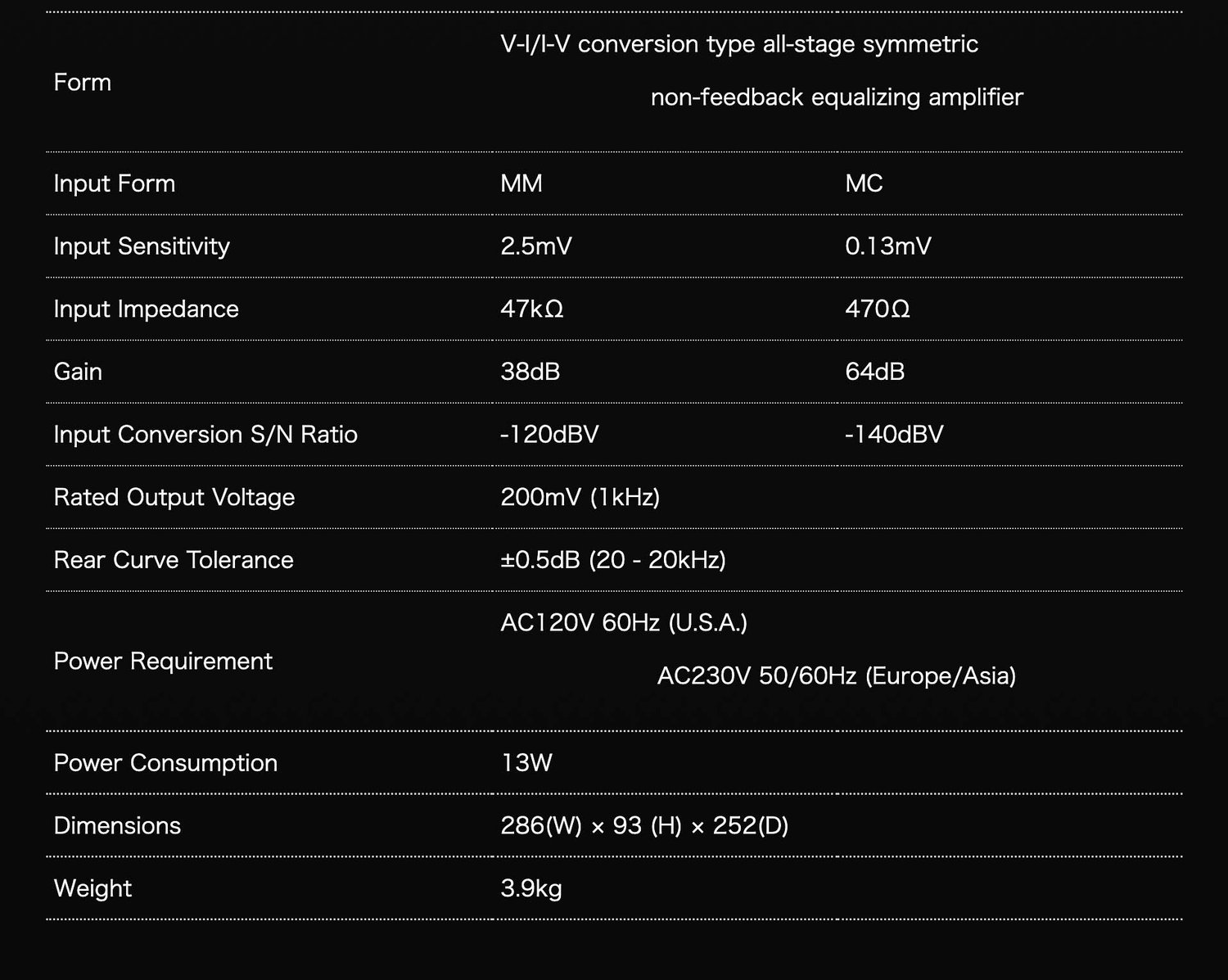 There are no reviews yet.

Have any questions about this product?
Request a Call Back

Enter your contact information below to have one of our experienced and friendly product specialists give you a call back within 24 hours.